[posted on behalf of Elise Marshall]

Where did it come from and what’s it all about?

Kinder Scotland came out of a kind of beautiful synchronicity.

Our u lab coaching circle which met at the Glasgow Buddhist Centre was so inspired by Nipun Mehta’s inputs to the course, that when we heard about a 30 day kindnesss challenge he mentioned, we were keen to try it.  Meanwhile one of our coaching circle members Kuladharini, in her role of CEO at Scottish Recovery Consortium had become aware through their research about something surprising that was needed to prevent drug deaths – compassion. And her proposal was that the Kindness challenge could be a venture by the Scottish U.Lab community to invite the whole of Scotland! Thus, Kinder Scotland 2017 was born.

We soon realised that we really needed to see for ourselves how it would work and this became our prototype – trying out the kindness challenge by using the Kindspring.org website which was set up by Nipun Mehta’s collective ‘Service Space’  for exactly such challenges. We undertook to carry out a different act of kindness every day for 21 days from 21st November 2016 and telling others about it.

Here are a couple of the dozens of things that members of our coaching circle did as part of the prototype.

One of us anonymously wrote 4 inspiring messages in chalk on the approach to the local school , later to be told by a passerby to ‘walk that way, the messages get even better!’

Another of us spent time unhurriedly helping an elderly couple where the man had drunkenly fallen over; the woman was so grateful she took both her hands, said lovely things and gave her a big hug and kiss.

We discovered how kind we already were, how we could usually find those extra few minutes to help someone out, that we could go a bit further than we normally would, that even when we felt there was nothing we could do, such as witnessing a friend get a parking ticket, there was something we could do – offer a hug! We enjoyed it, delighted even in coming across opportunities to be kind and making new connections. For me, I felt I became much more part of the world and I took a great joy in the adventure of it – what can I do today? On one occasion I spontaneously rerouted my run in order to pick up litter in my local park. It became a sort of cross country affair with lots of backtracking  to and from bins– but I was beaming!

It was a very simple concept but we were blown away by it and we were keen to progress to roll it out as widely as possible. I had the feeling that people inherently want to be kind and simply need some more permission and help to do so in the context of our often individualistic culture.

So, we launched in January with the help of various partners including U.lab, Scottish Recovery Consortium, Carnegie Trust and Visit Scotland and over 360 people signed up.  I found it more difficult this time around, harder to do something different every day as I had used up a lot of ideas first time! Then I decided that it was far kinder to myself to let go of that. I certainly learned more about kindness to myself this time around – after a conversation where I was challenged to become really good at receiving I incorporated this into the challenge for me – to practice being really good at receiving kindness in even the smallest ways such as accepting someone to lift my bag when I was able to do so myself. 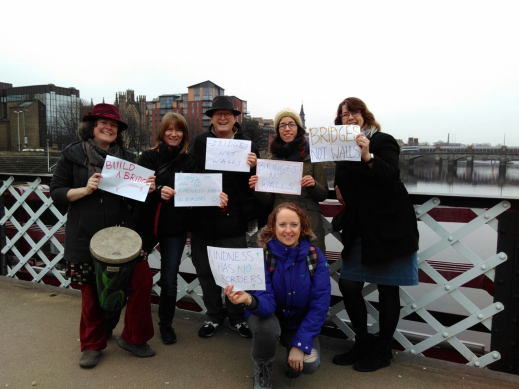 I also had the chance to take it wider when Anna, from my coaching circle, became involved in a movement called Bridges not Walls and organised for us to join her in hanging a banner on a pedestrian bridge in Glasgow on a very memorable day in January 2016. It read ‘Build bridges not walls: Kindness has no borders’. I loved being part of this and connecting with other people from different groups and communities hanging positive messages for Glasgow and the world to see. I felt so hopeful. 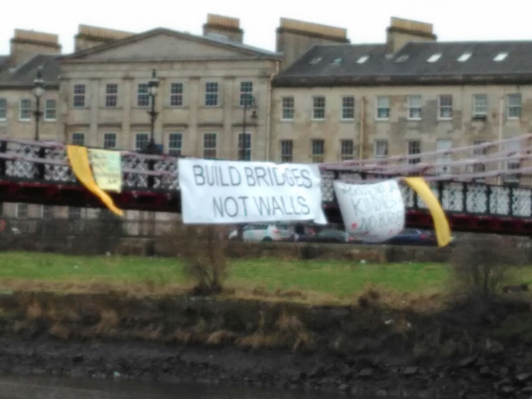 I loved reading the posts on Kindspring and this continues to move and inspire me to go further, look outwards, connect.  I know that some people found the challenge hard to engage with, finding the daily emails too much, struggling with the technology or time or the content feeling a bit alien – more American than Scottish. Someone I know decided not to sign up for the challenge, feeling overwhelmed by the thought of ‘having’ to do something every day and instead made a personal intention to look for ways to be kind . She told me about noticing someone in the street who was walking with a walking stick in one hand and the other arm in a sling. She could see his laces were undone and approached him to ask if he wished her to tie his laces. He did and she really enjoyed their interaction. There are so many kind acts as a result of this challenge that have not been recorded and will only be known by the few directly affected.

I have been so proud to be part of Kinder Scotland and I intend to keep the principle alive in my life by using a daily journal. I’m looking forward to the review session on 20th Feb and I’m hopeful for an even wider Kinder Scotland 2018! I do wonder how far these ripples spread and while we can never really know – I believe they have the potential to change the world.

Did you take part in Kinder Scotland 2017?  Would you like to join some others in Glasgow to discuss your experiences and help us learn together?