I left my Edinburgh workplace and headed for Arthur’s Seat:- 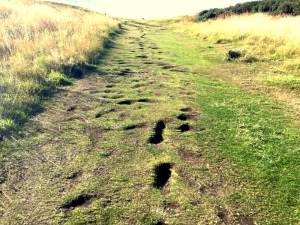 I pondered on the inspired perceptions of the Scottish Parliament designer Enric Miralles (1955-2000).

“Parliament belongs to Scotland. It originates from the sloping base of Arthur’s Seat and arrives in the heart of the city almost out of the rock.” 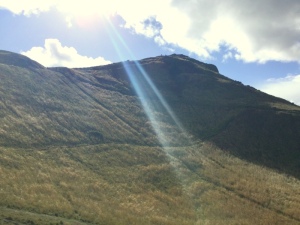 “The parliament is a form in people’s mind, it is a mental place. We have a feeling that the building should be land…built out of land to carve in the land the form of gathering people.”

“The land offers an amphitheatre: rock, soil, social formation from Arthur’s Seat to the city……the land itself will be the foundation the source material out of which a building will emerge.”

”A building emerging out of the land like a leaf”

“The place where the people of this land gather….”

People sit in the land, citizens, sitting, resting beside members of parliament thinking, witnessing their MPs creating a new democracy.

“The Queensberry house and garden will work as a protected cloister….where members of parliament will find place for rest, for informal discussion, walking and a place for meditation.”