For me, the  ‘U Lab’ (sign up at : https://www.edx.org/course/u-lab-transforming-business-society-self-mitx-15-671x) is about offering people ways to lead ‘from an emerging future’ through times of transformation and disruption, bringing to this task an ‘open mind, open heart, open will’. It’s been put together by a group from MIT in America (the same group that well known names in the world of systems change – like Peter Senge – belong to).

In a way it U Lab is a crystallization of decades of learning from social and business change movements, and it’s founded on a stark critique of our current economic, social and political thinking that Scharmer calls ‘organised irresponsibility’.

At heart, U Lab is an attempt to support and catalyse an emerging community of change makers to step up our impact by paying more attention to how we learn and create new solutions for ourselves, and also together. The first time around, something like 26000 people took part from 126 countries.

How the Scottish Government got involved

One of those people was a Director in the Scottish Government (Kenneth Hogg). In his capacity as lead on developing the ‘policy profession’ within the Government, and mindful of First Minister Nicola Sturgeon’s commitment to put participation and community empowerment at the heart of her approach to government, Kenneth thought that U Lab could help. It is focused on better meeting future challenges, it is a participative approach, and focuses on turning actions into real action. He asked members of his team – Angie Meffan-Main and Keira Oliver – to book three dates for ‘warm up’ events in June, July and early September. The idea being to attempt to seed wide interest in the course and in particular to encourage people from all walks of life to host ‘hubs’ – spaces where people could come together for the live sessions… the times when the many thousands of people from around the world tune in together.

The second global U Lab ‘MOOC” (Massive Open Online Course) kicks off on September 10th. And on 1st September the team running the MOOC will be in Edinburgh to support an event – the last of three – for people interested in participating. In preparation for this, a team of six people from government, private, third and public sectors have come together to design an event that we intend will build significantly on two previous events.

With the event happening in under four weeks and already 250 people signed up, a group comprising volunteers who have attended previous sessions met yesterday to start the design process. At the end of our meeting, we decided to share what we’ve come up with as this blog – to both ‘walk our talk’ about working in transparent ways that are accountable to the wider community now gathering around the U Lab; as a way to record our decisions; and as a way to invite feedback towards creating an event with even more of a buzz than the first two.

The first and second events had been led by Kenneth Hogg (Director for Local Government and Communities in the Scottish Government), with support from his team. At the end of the second event Kenneth signaled that he’d like to invite a wider community to take a lead on the next event, and proposed that the third event could have a different, more co-created feel: less about talking from the front, more about sharing what’s happening in relation to this work across Scotland.

Before the 3rd July event, about 25 people were invited along to brief Otto and colleagues on the Scottish context to help them ‘tune in’ to where we are at. After the event, this group got an email if anyone might be willing to join a design/hosting team. In addition, a couple of folk had pro-actively offered to help out following the second event.

Those who could agree on a date to meet have now become the design team: Debbie Bayne, Peter Ashe, Jenni Inglis, Fiona MacNeil, Karen Lawson, Julie Arts (calling in from Belgium) and myself.

We met on August 6th and these are the key themes as I heard them from our conversation:

‘Raising the Bar’ and communicating with those coming/colleagues Some of our discussion was about who we were and what our mandate was: 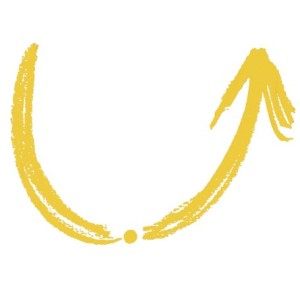 Reflecting on previous events, we framed these questions: 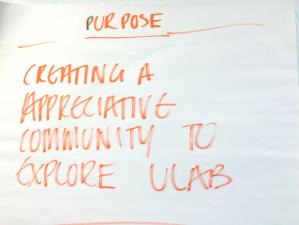 At this point I proposed that our conversation might itself be following a ‘U’: we began with a ‘check in’ (in U language ‘download’ about who we were); then we had a frank conversation about our views of previous events (including feedback from others that we’d heard) and what we personally would need to step into putting work into creating the next one (‘debate’ and ‘sensing’). I proposed we now work together on a statement of purpose for the 1st September event. This took about 30 minutes: we took time to sit in silence to tune into a sense of the best potential for what might happen. The pace of our conversation slowed down, and we disrupted a pattern from earlier so we could hear softer voices as well as more forceful ones. We arrived at the following – draft – statement of purpose for 1st September:

Purpose of 1st September is to create an appreciative community ready to explore U Lab 2.0.

So now we’re moving into a ‘prototyping’ phase – coming up with early designs for the event towards agreeing on one to try.

A little more background – how this design group came together

To support the U Lab ‘warm up’ events, Kenneth asked Otto Scharmer if he and his team might be willing to support Scotland to help get the ball rolling. At around the same time, a number of us who had also done the first U Lab met up. We decided to work together to support these events in June, July and on 1st September.
For my part, I offered three things back in May:

The first two events attracted 180 and 250 people respectively. Each time, there was quite a buzz in the room: it seemed clear that there was much more happening than simply telling people about a new course and I tried to capture this sense in the first two films.

Immediately after the second event I was on leave for a week and when I returned Kenneth and Keira had also left on holiday and had proposed that I now work with Julie from Belgium – who works with the global U team – to design/host the third event on September 1st.

So I now find myself in the exciting place of supporting a shift of ownership and control towards an emerging ‘U’ community: just the type of work that the government is going to be doing more and more of.

At the heart of this is the balancing act of turning up ‘as myself’ to support this shift of power and control; whilst also being a Scottish Government person and all that entails. As we observed in the design group meeting, there is a lot happening around this apparently simple task of designing an event: this is a moment when the nature of government, and how government is done, is changing; and it’s a moment when there is more potential for more of us – as citizens – to step forward to help create the new relationship between citizen and state.

I’ll blog again to share how it’s going. Perhaps that will be part of the key about navigating this new way of working: learning how to be open about it and also being open about the feedback I get after taking this risk…

4 thoughts on “Co-creating the next U Lab event: notes from our first design meeting”